A long silence my friends …. many apologies. But I’ve been busy. Teaching, marking (‘grading’ in the US vernacular), administration, conferences, fieldtrips, a fleeting holiday ….. then back to teaching, marking, administration …. the academic merry-go-round never ceases. More on some of these activities at a later date.

For now, I just want to draw attention to the online release of the brochure ‘10 Reasons Why Geomorphology is Important’. Available via the British Society for Geomorphology’s website in both full colour and ‘printer friendly’ versions: http://www.geomorphology.org.uk/news/73

It’s a fascinating read, I promise …. it’s an attempt to introduce the term ‘geomorphology’ to a non-specialist audience and to distill the essence of geomorphology down to some of its essential principles – the 10 key reasons why geomorphology is important – using a minimum of words. The brochure tries to ‘atomise’ the science (if you like that term) and may explain why I spend as much time as I can digging holes in loose sand in the blazing sun or chipping chunks out of rocks while perched on the edge of precipices. But as is often the case, the back story to the production of the brochure may be as (or more?) interesting. So here we go.

The idea for the brochure took hold when I stumbled across the guides for Climate Literacy (www.globalchange.gov/resources/educators/climate-literacy) and Earth Science Literacy Principles (www.earthscienceliteracy.org), both inspired by initiatives emanating from the US. These were attempts to outline the basic aspects that any educated citizen should know about these important topics. The Earth Science Literacy Principles guide subsumed important aspects of geomorphology but without using the term, and this has long been a bug bear of mine …. geomorphology is clearly part of – but quite a distinct part of – Earth Science, and as someone calling themselves a geomorphologist and keen to promote my brand of science, I thought I should do something.

At the time, I was serving on the Executive Committee of the British Society for Geomorphology (BSG), the UK’s professional organization for geomorphologists. In late 2012 and early 2013, I floated the idea for producing a guide to ‘Geomorphological Literacy’ – the key points that any citizen should know about the science of landforms and landscapes – and this was seen as a good idea. I would take primary responsibility for writing, but work with Heather Viles at the University of Oxford (and then Chair of the BSG) to produce a draft that we would run past the rest of the BSG Committee for comment and approval.

Upon starting (July 2013), I quickly decided on the 10 key reasons. These would begin with an explanation of the basics of earth surface processes and landform development, then outline the main factors influencing landform/landscape change, then make a case for why anyone should care about these issues. This was not much of a problem. But writing pithy, accurate text to expand on these reasons is more challenging. There’s just so much that could be said, and it’s tempting to add nuances and caveats to every apparently straightforward statement. Anything too short risks underestimating the complexity of the science but anything too long and detailed would defeat the objective of the exercise. Nonetheless, a first draft is produced that I think strikes an appropriate balance but I know that complex terminology inevitably has unwittingly crept in and things that I now take as obvious may not be so for others.

A thorough read by Heather highlights some areas that could be improved from a structural perspective (e.g. a more ‘reader friendly’ introduction) and makes some very helpful suggestions, including adding some ‘key facts’ that would support the key reasons and that might provide a hook for readers; uplift of the New Zealand Alps is roughly the rate at which your finger nails grow …. that sort of thing. I agree: it’s never a bad thing to relate complex earth surface processes and landforming events to more common experiences.

I build these initial comments into a second draft and distribute to my long-suffering wife and parents for comments (August 2013). These people represent the sort of audience that I am hoping the brochure will reach: ‘the interested public’ but a public with no specialist knowledge of the science. Some terms are highlighted as too complex: some obviously so (‘chemical precipitates’) but others surprise me (‘biotic’). No problem: I can eliminate these terms or use something more ‘everyday’ (‘biotic’ becomes ‘biological’ or ‘ecological’, for instance).

Back to Heather for a second round of comments, then a third.  Some more tweaks are made, additional figures are included, and then additional comments come in from members of the BSG Committee (early 2014). As my term on the Committee had now ended, these comments are all anonymous and relayed to me by Heather in summary form. Some are helpful and straightforward (a tweaking of the text here and there, some additional ‘key facts’ to provide the essential hooks) but others I am not so convinced about (e.g. changing the title, and making the 10 reasons much shorter, punchier statements). A long phone conversation with Heather follows (July 2014): I start to become convinced that rather than ‘Geomorphological Literacy’, the title ’10 Reasons Why …’ might be more user friendly, and we agree on sensible ways to accommodate the other more contentious comments. A further draft is produced (August 2014), then there’s a mad scramble to get the brochure finalised, produced and released for the BSG Annual Meeting (early September). At this point, Chris Simpson at Fulcrum Graphics really comes to the fore, and produces an attractive layout and some very useful suggestions for additional images and web-based links. By sending multiple emails across the Atlantic and through time zones (Heather remains in the UK while Chris and I work from the States), between us we manage to iron out errors, inconsistencies and presentational flaws. Success: Heather picks up the print run in time for the Annual Meeting. Hard copies are distributed and its release is announced via twitter (see example below). 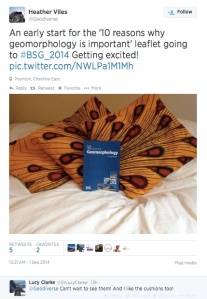 I must express my thanks to all that have helped bring the idea of a brochure to fruition. It remains to be seen, however, whether the brochure is successful in achieving its aim of communicating just what geomorphology is and why it is important. Inevitably, it may just be read by people familiar with the term, the essence of the science, and its importance (‘the converted’) and not really reach the intended new audience (‘the convertibles’?). But the online availability may ensure wider dispersal. A drip, drip, drip (or is that a tweet, tweet, tweet?) of twitters may also help …. see below for one of my favourites so far. Undoubtedly, some parts of the text may be hard to assimilate by those completely unfamiliar with the science.  Everyone reader will have such a different level of background knowledge that some parts may be easy and others harder but hopefully everyone will be able to latch onto something of interest.  If you are converted, please spread the word, and also send me any photos of the brochure in exotic places. But remember that geomorphology – just like geology, climate and ecology – is also a fundamental element even of the most mundane places! 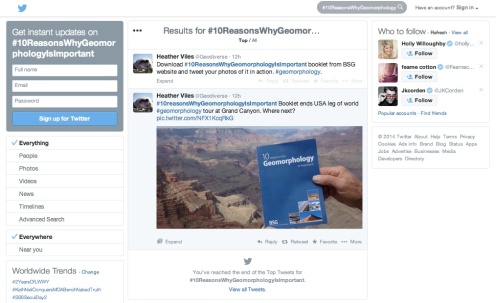