“The Anthropocene is up there with Copernicus’s heliocentricity or Darwin’s theory of evolution as one of the most profound shifts in worldview that has emerged from scientific endeavour” (J. Rockström in The Guardian, 17th Nov 2015)

This is a bold claim indeed. But what exactly is the profound shift that is referred to? The Anthropocene (from anthropo– for ‘human’ and –cene for ‘new’) is a term that has been proposed to signify the pervasive role of human activities – air pollution, species translocations, ploughing, mining, damming, dredging and construction, among many others – in influencing atmospheric, biological, and land surface changes. Some of these changes appear to be ‘dominating’, ‘overriding’ or ‘overwhelming’ natural forces, and to be sufficiently significant and permanent to have shaped Earth’s recent and potential future geological record. In short, have we now exited from the Holocene epoch (the present interglacial time division that started around 11 700 years ago) and entered a new geological interval, one defined by humanity?

The answer to this question, and thus as to whether the Anthropocene should be formally adopted as a new, uppermost time division in the geological column, is still subject to vigorous debate. Some geoscientists remain unconvinced of the justification, practicality or utility of a formal adoption (for an extreme viewpoint, see: http://theconversation.com/enough-anthropocene-nonsense-we-already-know-the-world-is-in-crisis-43082).  Amending the current subdivison of the geological timescale is a slow, contentious business, although a judgement from the International Commission on Stratigraphy is expected sometime in 2016. But beyond geological committee rooms, the answer – whether positive or negative – also has philosophical, ethical and moral dimensions, with implications for debate and practice across the natural sciences, social sciences, humanities and arts. For this reason, use of the term ‘Anthropocene’ in printed literature has seen an explosive rise (neatly charted by Google Books Ngram Viewer) since Crutzen and Stoermer first outlined its geological significance in Global Change Newsletter (v.41, 2000), a short but influential article that prepared the ground for subsequent debate and speculation.

One could in fact argue that the term has now gone viral, and perhaps represents just one more environmental buzzword in the zeitgeist; indeed, as geologists Autin and Holbrook ask, is the Anthropocene debate an issue of stratigraphy or pop culture? (see http://www.geosociety.org/gsatoday/archive/22/7/article/i1052-5173-22-7-60.htm). Certainly, the term has now travelled far beyond academia, and commonly features in the titles of popular books, newspaper and magazine articles, and exhibitions. For recent examples of the latter, see:

To provide our own perspective on this rising tide of Anthropocene-related debate, visual artist Julian Ruddock and I recently held a one-day symposium entitled ‘Strata: Art and Science Collaborations in the Anthropocene’ (Aberystwyth Arts Centre, January 15th 2016). The symposium was supported by the School of Art and the Department of Geography and Earth Sciences at Aberystwyth University, and by the Visualising Geomorphology Working Group of the British Society for Geomorphology (http://www.geomorphology.org.uk/node/1023). Building on the successful ‘Future Climate Dialogues’ symposium (Aberystwyth Arts Centre, June 13th 2013 – see http://cargocollective.com/artscienceclimatechange/Future-Climate-Dialogues-Abstracts), over 25 oral, poster and film presentations focused on art-science collaborations around the nominal themes of ‘Earth’, ‘Water’ and ‘Ecosystems/Life’ (few submissions were received for an intended ‘Air’ session).

Even prior to the call for contributions, it had become clear to us that the Anthropocene is already a term that means many different things to many different people. For some, it is a scientific term that carries a precise geological interpretation. For others, the Anthropocene also represents a political project (after all, what better way to make a statement about humanity’s environmental impacts than to name a geological time interval after ourselves?). Many use the term as a convenient catch-all for any form of human influence on the environment, including multifaceted technological and behavioural developments that may not have any significant or lasting geological impact. And for others still, the Anthropocene is less a scientific than an aesthetic event; something to be re-imagined as an affective rather than a scientific fact (see, for example, Davis and Turpin’s edited collection of writings about art in the Anthropocene). 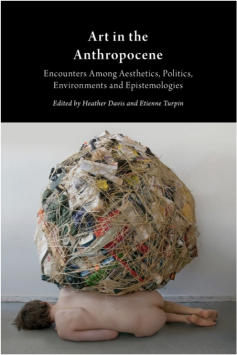 Key questions that we hoped to address through ‘Strata’ included: i) how are the arts and sciences exploring these multiple meanings, either in isolation or in collaboration?; and ii) how can we encourage greater art-science collaborations, especially around the Anthropocene theme?

The full programme of events, along with the oral and poster presentation abstracts and the biographies of contributors, is hosted at http://cargocollective.com/artscienceclimatechange/Strata-Art-and-Science-Collaborations-in-the-Anthropocene [nb. the plan is to add some images and sound to the site, depending on contributors’ permissions]. Following an introduction by Julian and myself, Dan Harvey (one half of the respected Ackroyd & Harvey artistic partnership) provided the keynote address, drawing on personal examples from a long history of art-science collaborations in confronting environmental issues. One particular work (Ice Lens) has even graced the front cover of the prestigious science journal Nature Climate Change (March 2012).

Subsequent presentations – both during the day and in the linked evening session – mined a rich vein of art-science approaches, including those using different combinations of visual art, sculpture, film, poetry, writing, sound and music. Intervening discussion sessions and refreshment breaks provided opportunities for questions and debate. Despite the inevitable time constraints – and the unwanted interjections of a drunken interloper who nonetheless slurred one of the more concise but most scientifically-contentious questions of the day (‘Are we now in the Anthropocene?’) – overall the symposium appears to have been a qualified success.

How so? The first of the key questions posed above was addressed more than satisfactorily. The range of presentations at ‘Strata’ provided ample demonstration of the plural meanings now attached to the Anthropocene. Many presentations – highly entertaining and informative though they were – made little or no reference to the term’s original geological meaning. Clearly, the Anthropocene has escaped far beyond these confines, and regardless of whether the term ultimately is formalised as signifying the latest interval of geological time, it is here to stay.

The second of the key questions proved less easy to address. Discussion both within and outside of the formal sessions highlighted some obvious difficulties in art-science collaborations. By and large, scientists want to communicate facts, figures, terms and concepts in ways that are as unambiguous and precise as possible. Established scientific conventions dictate how we should observe and describe the world; meaning (‘interpretation’) then follows. By and large, artists tend to see their role as introducing ambiguities and free thinking in their filtering and presentation of material. Rather than operating in a didactic mode, they commonly want to challenge convention; the beholder of the artwork is then tasked with searching for, perhaps even generating, meaning. Of course, such stereotypes can be challenged, and even highly contrasting worldviews are not necessarily mutually exclusive, but the task is to identify ways to identify and pursue shared agendas in order to produce work that is both scientifically meaningful and aesthetically challenging. Ackroyd & Harvey’s work – along with that of other contributors to the symposium – shows that it can be done. Discussions at ‘Strata’ touched on the importance of creativity, intuition and inspiration in art and science practice, and some practical strategies for encouraging interdisciplinary collaborations were outlined. Hopefully, the seeds of some good ideas have been sown in fresh furrows. For instance, could a follow-up meeting be organised as an art-science workshop, with short presentations being interspersed with breakout sessions to encourage blue-skies thinking and creative collaborations? Could fieldtrips be used to inspire creative collaborations? The evening contribution entitled ‘Argae: Writing the Anthropocene in the Welsh Uplands’ provided an example of the possibilities that could result from the latter; four writers and poets (some with science backgrounds) provided very different creative responses to a shared landscape experience, namely a day tour through the Elan valley in mid Wales, where a series of reservoirs, dams and HEP generators serve as highly visible (although likely not long-lasting) symbols of human manipulation of the hydrosphere. Similar tours – perhaps broadening out to incorporate film makers, visual artists and musicians alongside scientists – could pave the way for other creative responses to various human-impacted landscapes.

Partway through the day, one contributor had reminded us all of a quote from Leonardo da Vinci (AD 1452 – 1519):

“Principles for the Development of a Complete Mind: Study the science of art. Study the art of science. Develop your senses – especially learn how to see. Realize that everything connects to everything else.”

As we approach the quincentenary of da Vinci’s death, we now have vastly more ways of sensing the world, some going far beyond direct human experience. Yet in the face of a tidal wave of environmental problems, many brought to greater prominence by the Anthropocene debate, we are still scrabbling for the best ways to see, especially the myriad interconnections. Symposia like ‘Strata’ provide glimpses of the possibilities but remind us that a full view has yet to emerge.